My fascination with paragliding

Let’s get a few questions out of the way.

Paragliding? So you jump from a cliff? Or from an airplane? 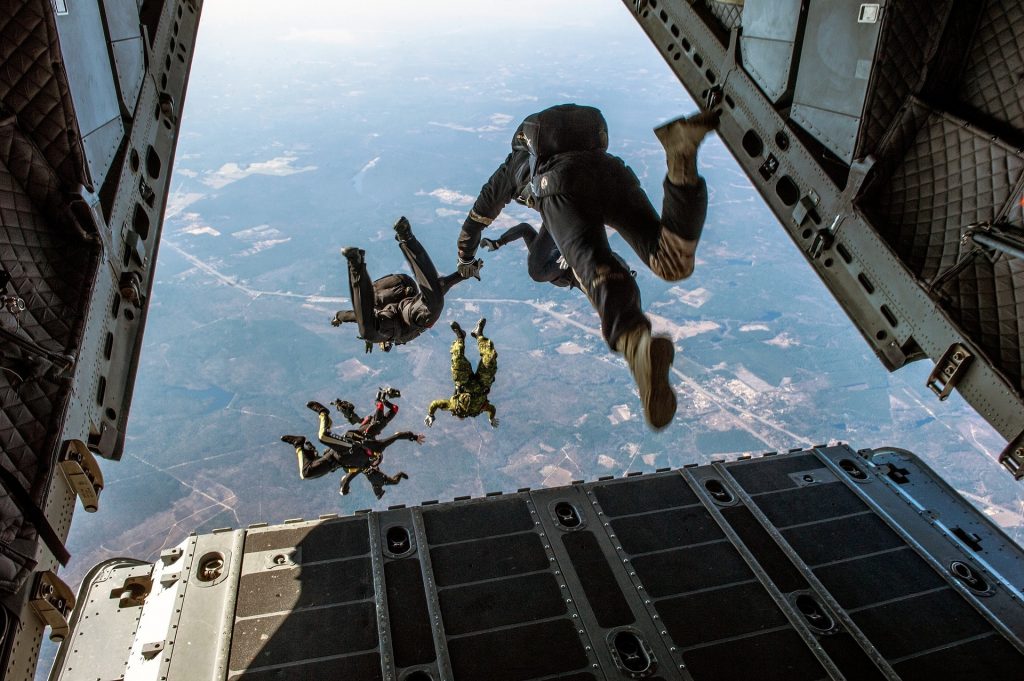 Some guys jumping from an airplane

No, actually, that’s parachuting. Or base jumping. They’re looking for the adrenaline rush 💉 and they use their parachutes just to get down to earth, safely.

Paragliding is different! Gentle slopes to start from, bigger wings, longer distances, no crazy adrenaline kick, using thermal winds to stay in the air as long as possible. Just look 😍 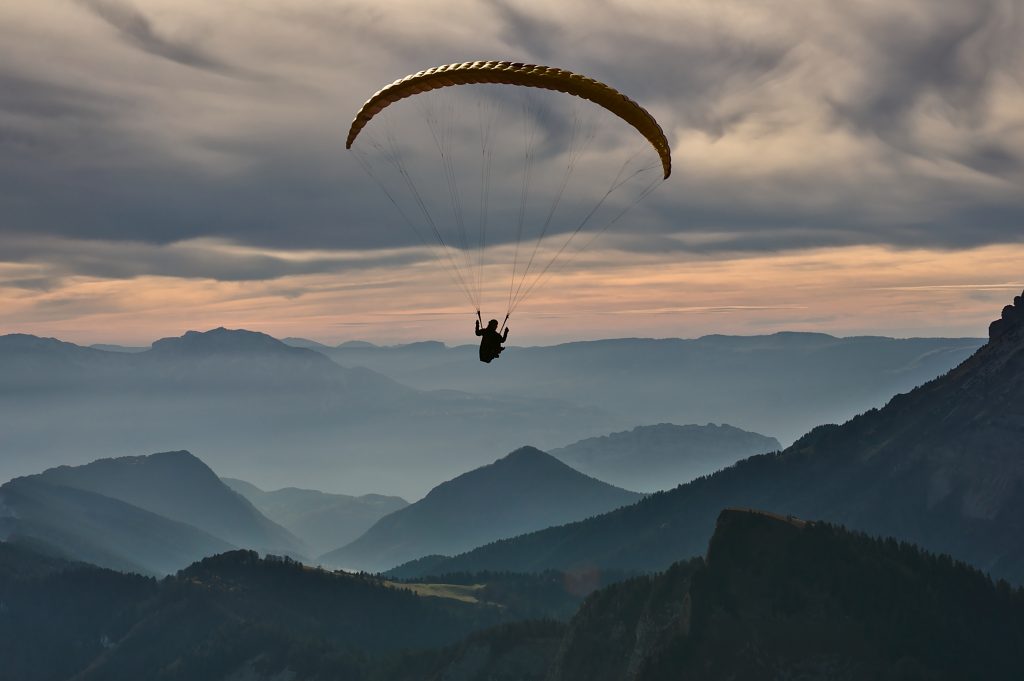 A paragliding pilot flying into the calm evening horizon

Safety is a big topic. Paragliding equipment constantly gets safer, you always carry a reserve parachute, you go through training. If you’re not launching in bad weather, if you check the forecast, if you prepare thoroughly before launch, if you listen to your fear, it’s all pretty much safe. Statistically it’s roughly as save as driving. And when something happens, you’re insured, too.

Of course, the internet is full of accidents. A pilot got sucked into a cloud, 9,946 meters high to the edge of the stratosphere. She froze but survived in a miracle. Inexperienced pilots sometimes fly into trees. But that’s even recommended when other landing alternatives would be a small pond or a rocky cliff. Also, birds can bring pilots down. But still, deaths are rare. Recently, concerns are raised that the improving equipment makes people more reckless.

Great 🎉. Now that we’re on the same page, let me share my fascination with you. Here’s what I’ve learned so far about the world of paragliding.

Who starts paragliding and why?

In general, people start paragliding, because they dream of flying.

Being able to fly with a 4kg sheet of plastic is crazy and amazing! The entire equipment, including the wing, a harness, a helmet, a reserve parachute, and so on, folds up into a small backpack of just roughly 10kg. That allows to go hike and fly.

This pilot here went for an aerodynamic harness, to go cross-country flying. 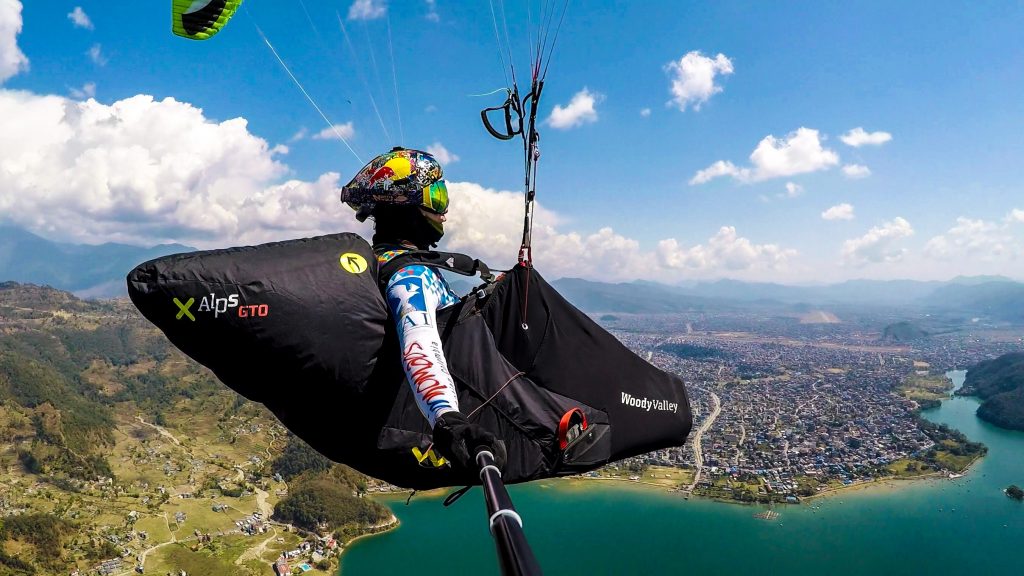 An aerodynamic harness, helmet, and yeah, a selfie-stick (photo by Sergey Pakhomov on Unsplash)

Paragliding is also the cheapest and easiest way to fly on your own. Getting a paraglider license is about as pricy as getting a driver’s license and the entire equipment costs between € 4.000 – € 6.000.

Some more reasons: it makes you feel weightless, it’s usually calm and beautiful. Practicing on the ground feels good too and can be quite a workout.

So people just get convinced. Well, who?

But I would guess that those three groups are the minorities. If I had to estimate the major groups of people who start paragliding, those would be:

And I’m not judging here 😇. I appreciate all of these motivations.

Where do they go paragliding?

The easiest is anything that’s a hill or a mountain with a large enough area to launch. Also sea-winds at the coast allow to go soaring. When thermals (rising air) in flat lands allow it, cross-country flying is also an option. Often people go 70km and more. 564.3 km in a straight line is the world record. When there’s no slope, pilots need a winch to tow them up in the air.

So there’s plenty of flying opportunity. But it’s still not as easy as getting in your car and driving. But hey, if this guy continues with his project we might all be flying with electric motors soon! Maybe even through the cities 🤩? Keep dreaming, kid. Just check out this crazy looking map with all kinds of flying restrictions. There’s an interactive version, too. 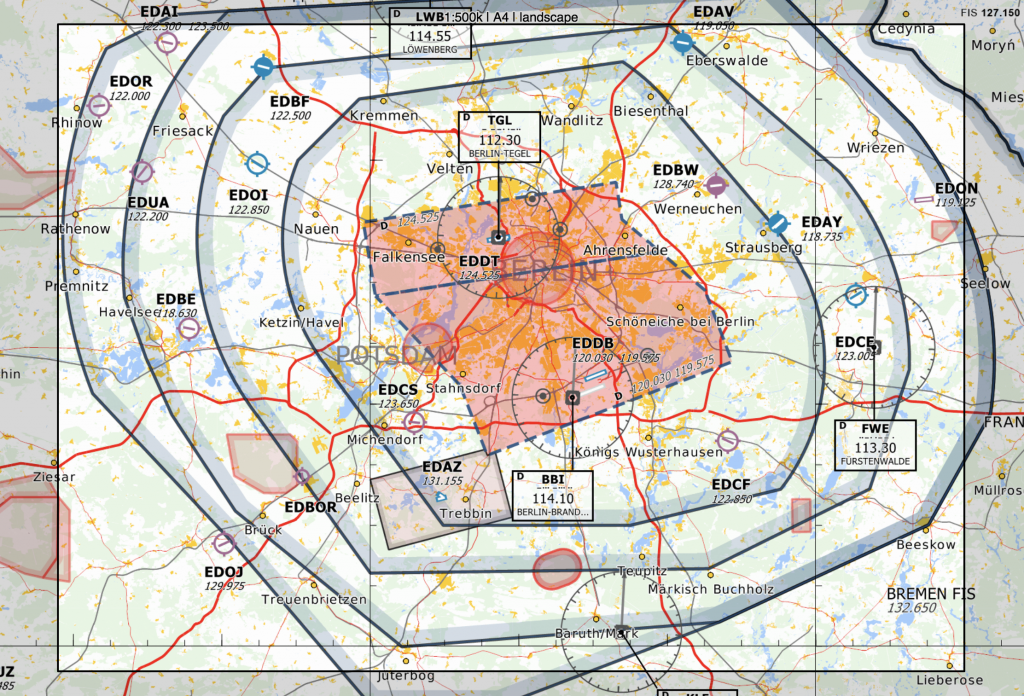 So if paragliders aren’t allowed everywhere, …

So much for the pilot side of things. Then there’s the industry side.

But back to the wing.

Just look at those shiny colors! And manufacturers get creative with the names too. 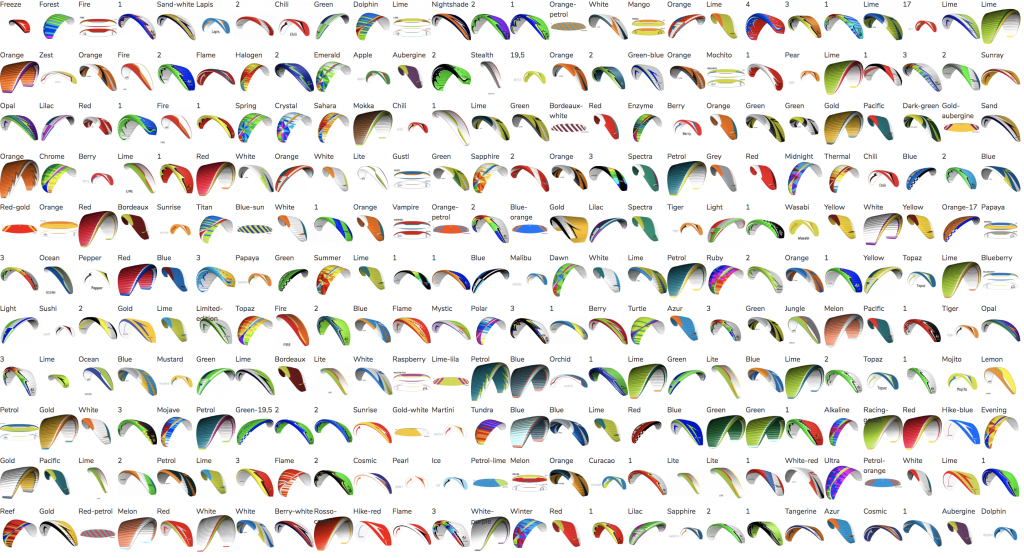 A collage of wing color options (© me)

With that number of designs, you would have guessed it: there are many paraglider manufacturers out there. At least 30 of those are well-established. That means they compete with each other for who builds the fastest, safest and least sinking paraglider.

The average „glide“, i.e. the ratio between going forward and going down is about 8. That means, in normal conditions, the paraglider travels 8 meters forward while sinking 1 meter. Manufacturers try to increase the glide. There’s a huge debate about how professional it is to advertise a wing including this ratio, since it can’t be measured accurately. The ratio depends on the weather conditions like sun and wind, on the pilot’s takeoff weight and on the applied amount of brake and accelerator. Yes, a paraglider has brakes, these are the lines at the back edge of the wing that can be pulled with either hand, one left and one right. That’s how the wing can be steered, too. The accelerator is a mechanism that allows your feet to pull on the lines attached to the front edge of the wing, making it fly faster, but sinking faster, too.

Am I copying wikipedia now 🤨? Well, the point is: the geometry that allows the wing to fly – and the pilot to control it – is really sophisticated. Read more here.

Manufacturers advertise the wings with professional videos, pictures, popular flights, test reports and specific design innovations. They also provide the technical geometry data, which means a pilot can roughly guess how difficult it will be to fly the wing. There are wings for different flying styles, different wind conditions, different skill levels and so on.

So as a pilot deciding for a wing, you’re comparing all of these things. In the best case, you have a chance to do a test flight.

In the very best case, you also have a good paraglider comparison platform, haha. If you didn’t know, that’s the one I’m building 😜.

Which brings me to building software for paragliding.

As a software engineer, I couldn’t be more curious about this niche. Eyes sparkling and all 🤩.

Sports software out there isn’t all too high-end, maybe except for very common sports like soccer, american football, baseball, these ones. So maybe I could help! In the previous months, I’ve been eagerly keeping my eyes open for paragliding software. Here’s what I discovered so far.

Paragliding launch and landing sites (world-wide) can be found on Paraglidingmap.

Paragliding events are started and coordinated on Airtribune. Live tracking of these events (in 3D ! Jeez!) happens on Livetrack360. Overall score is kept on XContest.

There are some cool people building the Groundhandling Challenge, basically visualizing a bunch of exercises a pilot can do with a wing on the ground. There’s even an app for that.

When flying, there is a Thermal map to look for predictions of rising air.

The pilot community is gathering in the old, but gold Paraglidingforum and – no surprise – in a Paragliding Forum Facebook Group.

A few online shops sell paragliders, mainly Flybubble, Paragliding Equipment, and Gleitschirm Direkt. I might have a location bias here 🤔

Last but not least, there is a paraglider database and comparison site: Para2000. So why am I building another one of those sites?

During my training, I was hesitating to decide for the right equipment. Even though my school had a wide selection of wings, just about 1-2 brands were actually sold to beginners. It sounds stupid, but back then I just didn’t like the available colors. So I was wondering which other wings were out there, certified for beginners.

Googling, I found some manufacturers. But there was no simple way of comparing the models. All of those different sizes and specs were confusing. When I found Para2000, I was amazed by the vast amount of wings. But also, I thought that there might be room for a fresh interface to help people like me, who just wanted a quick look into what is out there.

And I can build frontend web apps. So I rolled up the sleeves, gathered the data, talked to the manufacturers, became independent and here we go! This is a short preview screenshot. 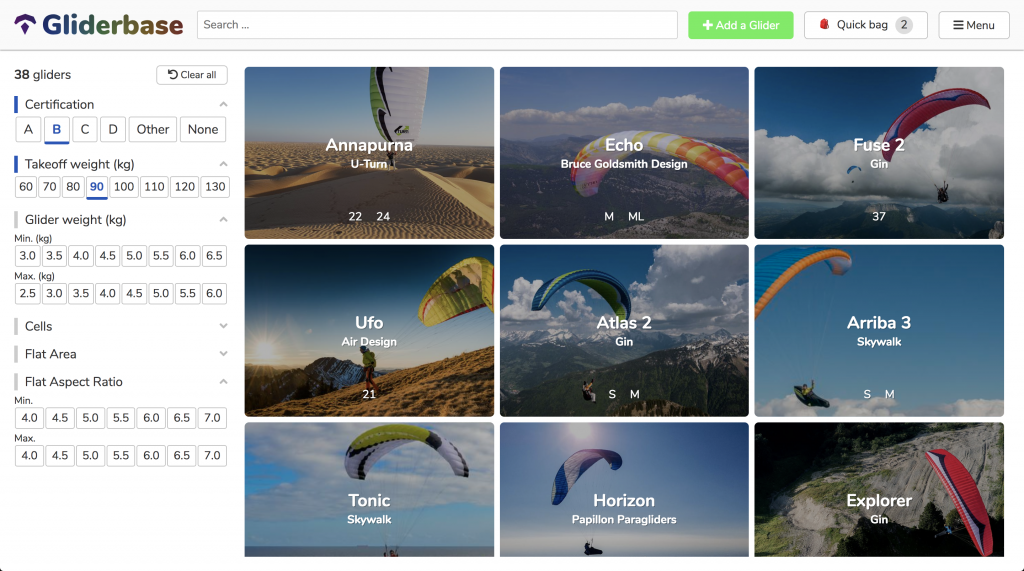 Check out gliderbase.com. If it’s not online yet, go tell me to get my stuff together and launch it already.

If you would like to add to any of the things mentioned here, or if you would just like to disagree 🧐, I’m curious. Write me an email.