My name is Kai, I’m 28 years old, studied software engineering at a university in Germany, got a Masters degree and some work experience.

Specifically, I love everything between the human and the machine. I like the product, the interface design, and the engineering behind it. The words alone make me become this kid with sparkling eyes 🤩. At university, the human computer interaction lab fueled my curiosity and the ME310 course broadened my horizons. I’ve spent some time at startup companies who have made it their mission to get the design right, to hand-tailor data engineering and to provide security at enterprise-level. In particular, working with a passionate team – big vision, early stage – excites me.

Luckily, these days, a graduate degree in software engineering is practically a ticket to a safe job. Now here I am, all pencils sharp enough, to do the task I’m given and to perform well. To perform in the business of someone else. Or wait, is that necessary? I’d argue, that most systems in Germany still push me towards earning the highest taxable income in a day job in the industry, while the actual biggest gain for society might be if I wouldn’t do that. For example, working in any social field or working in science or starting a business. All of these, I strongly believe, should be incentivized more.

So at 28, I feel like I owe it to my education and to society to pause and think.

It’s one of those situations in life, where you have plenty of roads to take. Now might be the time to search for a stable job with maximum salary, to build a family, a house, to get a car, to plan the holidays, all the usual things. But for some reason, I’m absolutely dreading this scenario. Some would describe this as quarter-life-crisis, or as a typical problem of Generation Y Yuppies.

But coming to think of it, I’ve never been a sad person nor a frustrated person for long. My whole „Germanness“ requires me to be direct, sober, and pragmatic, especially when it comes to work. So I just went a step forward and made a decision: I’ll be an independent software engineer.

But I’ve realized that I can create. I can plant the seeds and water the plants. I can even sometimes encourage others to join me watering. There are a ton of people with tons of gardens to tend to. So I’ve honed my skills to tend to their gardens. Then I’ve seen the gardens grow. But all the blooming plants that I’ve watered, as well as the plants that have withered, have always belonged to the people with the gardens. 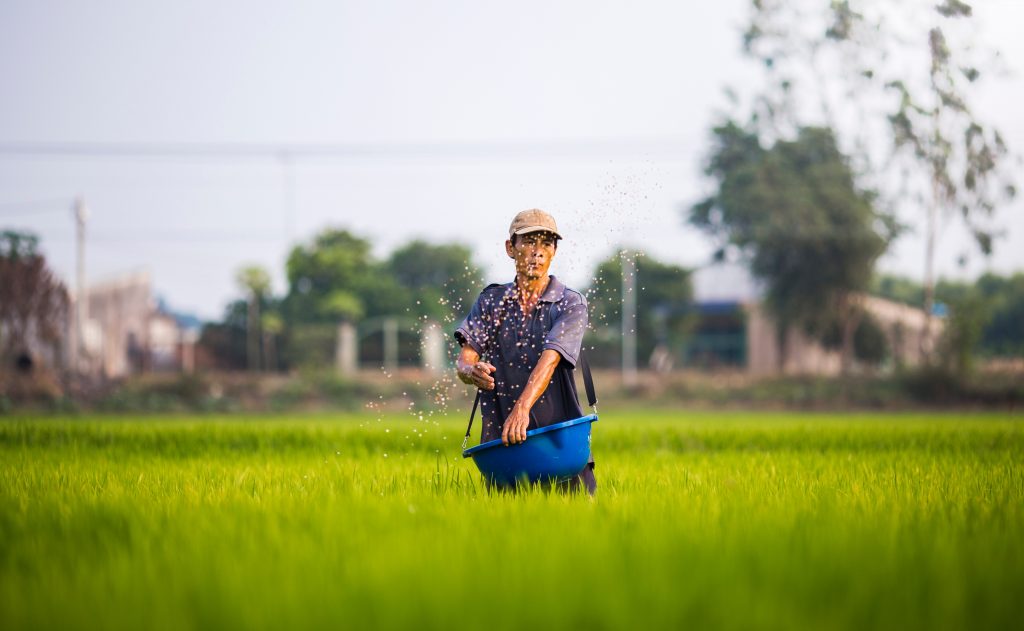 A person sowing a field – Photo by Dương Trí on Unsplash

Maybe I haven’t found a garden that’s transparently and collectively owned just yet. So I believe right now I can be more effective, more flexible and in the end more beneficial to everyone else, if I just started to sow in an own, small garden. Certainly, I lack all kinds of skills around a garden: organization, buying seeds and selling plants, even getting people together in one. But I do have the fundamental gardening skills and I’m curious to get to know the unknowns.

2) I wake up every time from a dream job

Some years ago, I still imagined that a „dream job“ could look somewhat like this. 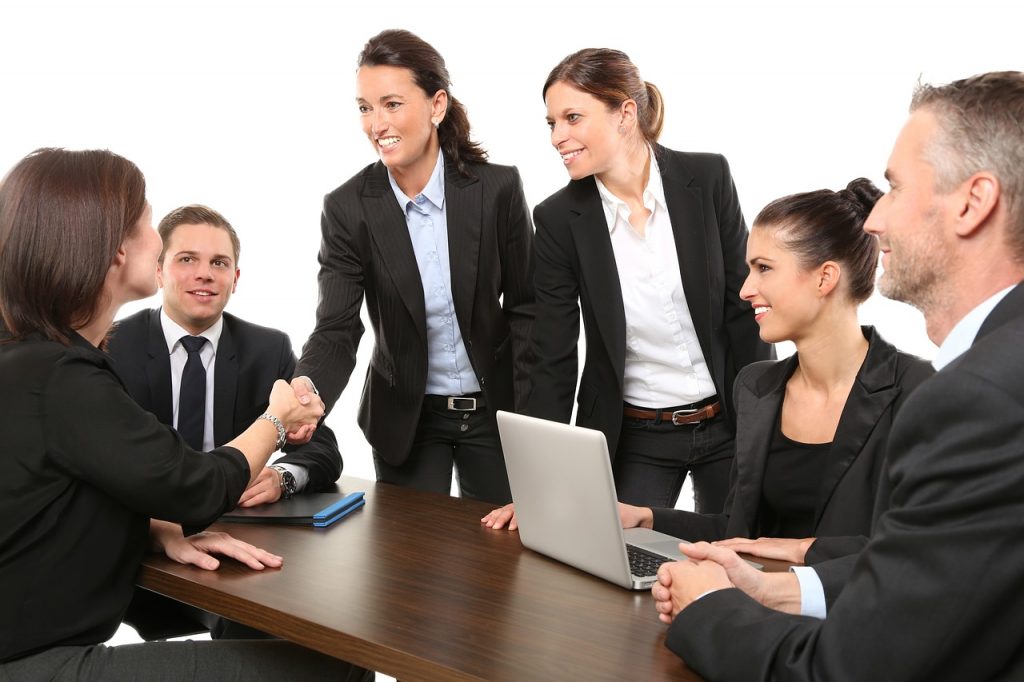 But in reality, many of these people in business uniforms aren’t as happy as they’re being portrayed. I saw the daily misery on my commute to Shibuya during rush hour: The salary men have lost their purpose, trying to be physically present at work at all times, forgetting why, unable to change anything. Even in a city that’s not known for it’s large corporations, like Berlin, you can see the grudge of the daily grind in people’s faces in public transport every morning. But it’s not just people in suits. I’d say this affects all kinds of White-collar workers, nowadays, also including those working in (mostly tech) startups. Plenty of reasons speak against working in startups, but being employed in a big corporation adds slow like a cherry on top. Even just the term big corporation makes you fear the whole thing. 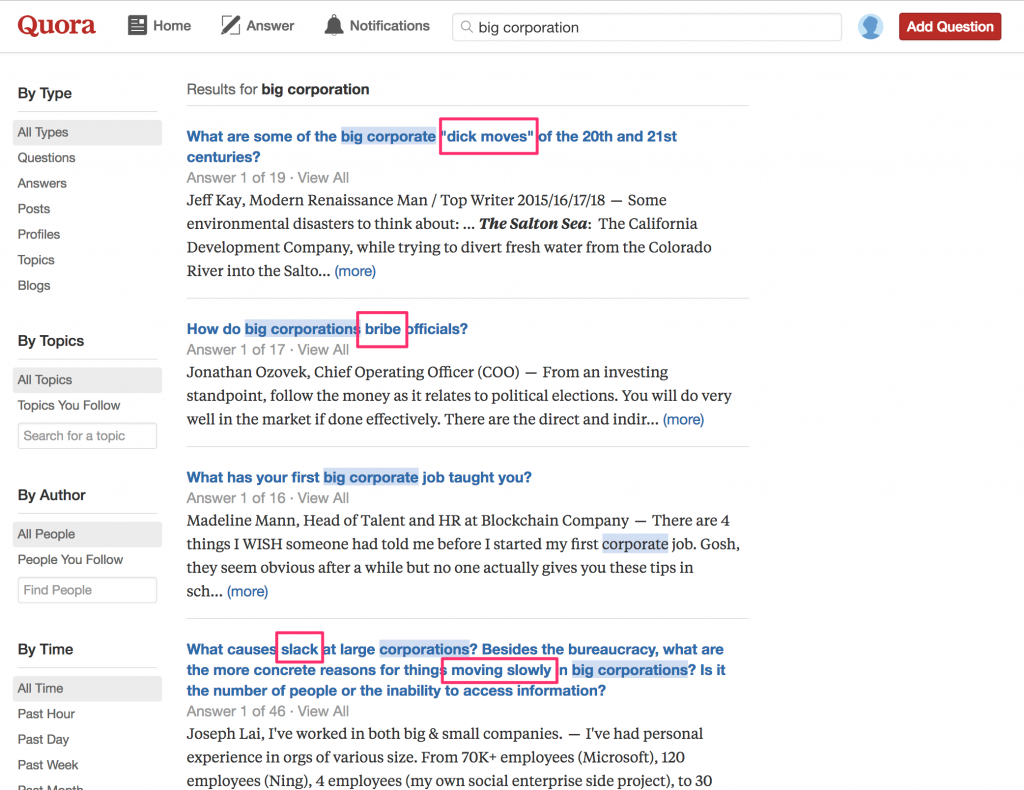 So many employees, just like me now, have optimized their days towards comfort. Then starts the path of misery. They’re starting to slowly narrow their view. Their motivation gives way to avoiding responsibility. They start accepting more restrictions. They start playing power games and participating in office politics. They start tolerating mediocrity in others and in their own work. They start blaming. Often without realizing, they’ve gradually stopped striving and they’ve stopped encouraging others to strive. All of these things, I’m observing in some of my colleagues, in some of my friends but also in my own recent behavior.

Then there’s the happy path. Employees join a company and the tasks are fun. They’re starting to be curious and learn. Their work gets appreciated and the company benefits are just great. They’re starting to understand the broader context and see the values. They identify with the values. Then it starts getting a little boring, but hey! A new challenge comes up, they start getting engaged again. Soon, maybe, a promotion will follow.

So, yes, I’m not saying that misery is what happens to everyone in a job. There are people who simply continue to strive in their jobs for decades, for their whole lives. There’s something very honorable and respectable in someone who is truely loving their job. I’m just seeing the opposite in more than half of the cases. Maybe that’s exactly the difference in having a job vs having a career.

In misery path, you still can’t blame any individual person for their behavior. According to spiral dynamics (read about it here and there), it’s probably yet another systemic problem. Yet you also can’t blame capitalism or corporations in general. For an actual impact you need a group of people, getting together to pull into the same direction. Big or small, you do need a group.

Now you might be waiting for a conclusion, but I can’t find a good one. No matter what I did so far, I always woke up from any dream job. All that remains is that you can’t ever blame anyone, except for yourself. That means you might as well make peace with yourself and everyone around you 🙏. It seems like there are two choices: transition to the happy path, or become self-directed.

So let’s be reminded that life can be full of great places to see and full of fun people to meet. Life can push you to your limits. It can surprise you today and frighten you tomorrow. Life can let you accomplish things you never thought possible. At least you thought, they were impossible for you. Life can be a rollercoaster of progress and decline. An adventure. In an ideal world, I believe that’s exactly how it should be. 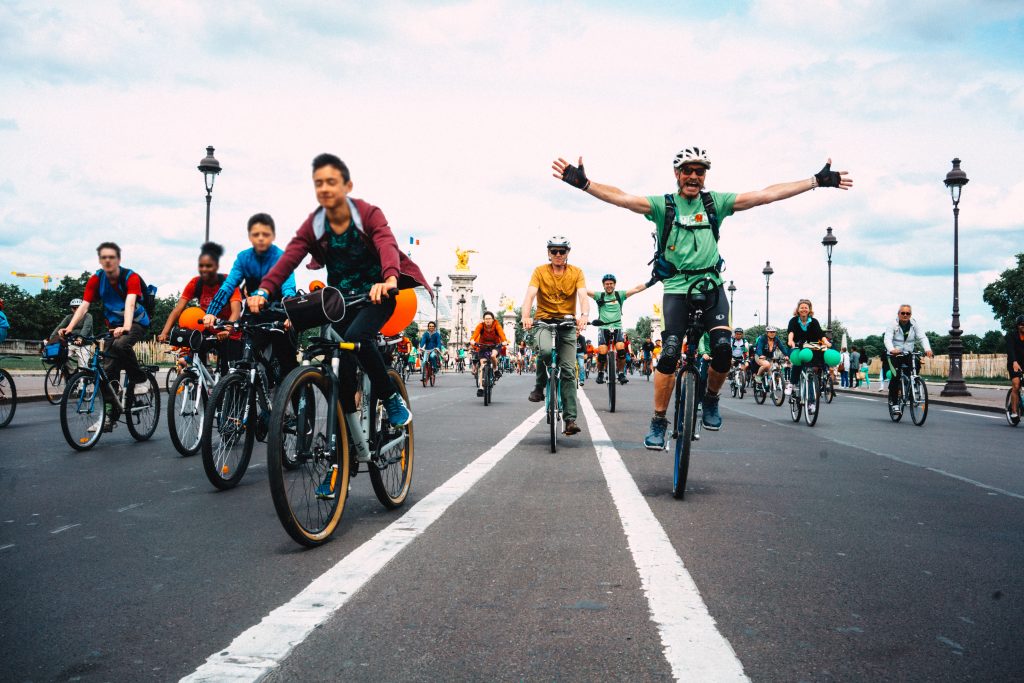 A cyclist, living and loving the moment – Photo by Fred Pixlab on Unsplash

But for me and apparently for others too, this is hard to achieve when being employed. It’s particularly hard, when you’re required to be at a single place all of the day.

It breaks my heart especially, when I see incredibly talented people becoming sarcastic or cynical when they’re in the misery path, their potential trapped in the four walls of the same location, every day.

Having seen all of this, I don’t believe I’ll ever be at my best, employed in an office job. Luckily, there are jobs where you can move around. Luckily, software engineer can be one of those jobs. Now independence – as one of the possible steps away from a fixed location – just seems like a natural thing to do. And I haven’t tried it. So I’ll trust a friend of mine, who said:

It’s sometimes okay not to swim from stone to stone, but to just get out in the water, curious, and swim.

Looking back 10 years ago when I was 18 years old, of course, I had no idea what I wanted to do when I was older. Yet funnily enough, I did know that one day I needed to get a good job. A job would be a safety net. There was no talk of alternative paths. So without much experience, I first tried the most ridiculous student jobs: removing glue off of freshly repaired shoes at the cobbler, cutting meat behind the scenes at a butcher, conducting surveys with train passengers, working monotonous tasks in a printing factory, counting products in a shop, „doing Excel“ in an office. And yes. Of course, I carried newspapers.

Early on, I had learned that there were plenty of jobs to make money from, to even make a living from. You just had to be curious and enthusiastic to get the job. Then you had to be disciplined and either competitive or diligent enough to prove you worked well. People were easily happy when you were just willing, and a little able, too. 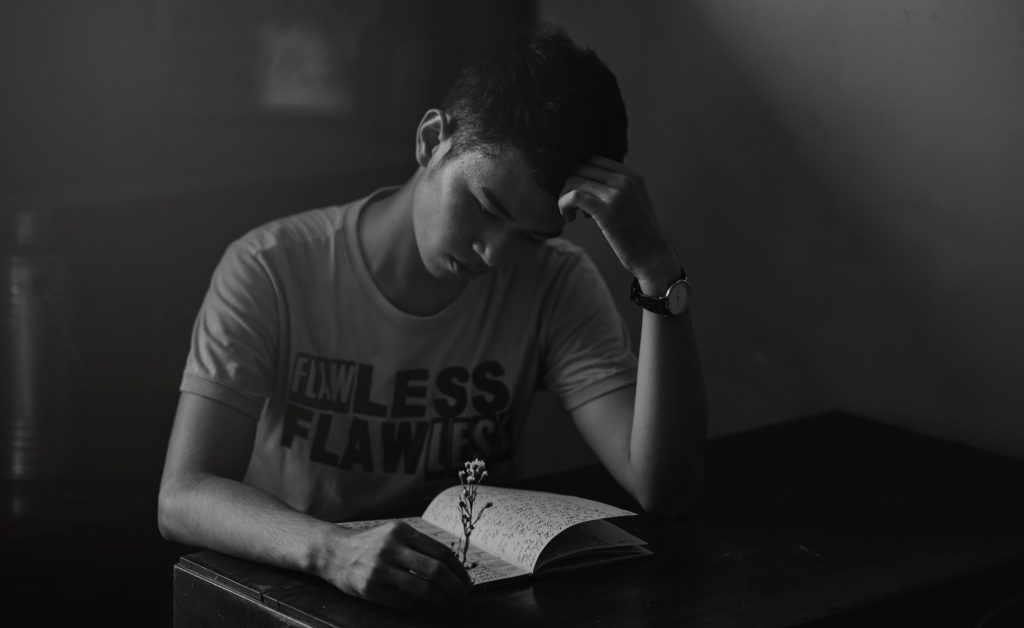 A student concentrating – Photo by Min An from Pexels

In the worst case, no matter which technical skills I might have or lack, I’ll hope that my curiosity and my discipline will remain as a safety net. I’m convinced that a good attitude matters more than any degree anyone can ever get.

Buckle up, ready for takeoff

From now on, I’ll vow to start something fresh, to keep my eyes and mind open, to dedicate my time to the experiments and to the causes I believe in, to apply endurance and to apply change when I see them necessary, to create all over the damn place and most importantly to own all of my successes and all of my failures. Then I’ll share and collaborate with others.

I feel like having a plan without having a plan. It’s up for debate, whether that is delusionally dull or just a mandatory mindset. Soon, at least, I will know more. Until then, may the sky not fall and may all alliterations approve.

Since I was 10, I’ve been doing sports. I’ve been tremendously encouraged by sports in all aspects of life. You can probably say I’ve become a better person, thanks to parents who let me decide what I liked and to friends who asked me to join the volleyball team, or to join for a run, or to join them for any other kind of sport. Joining for sports was never a mistake.

My first project will be about sports. About a sport that isn’t known well to everyone – paragliding. I’m building gliderbase.com – a comparison website for paragliders. 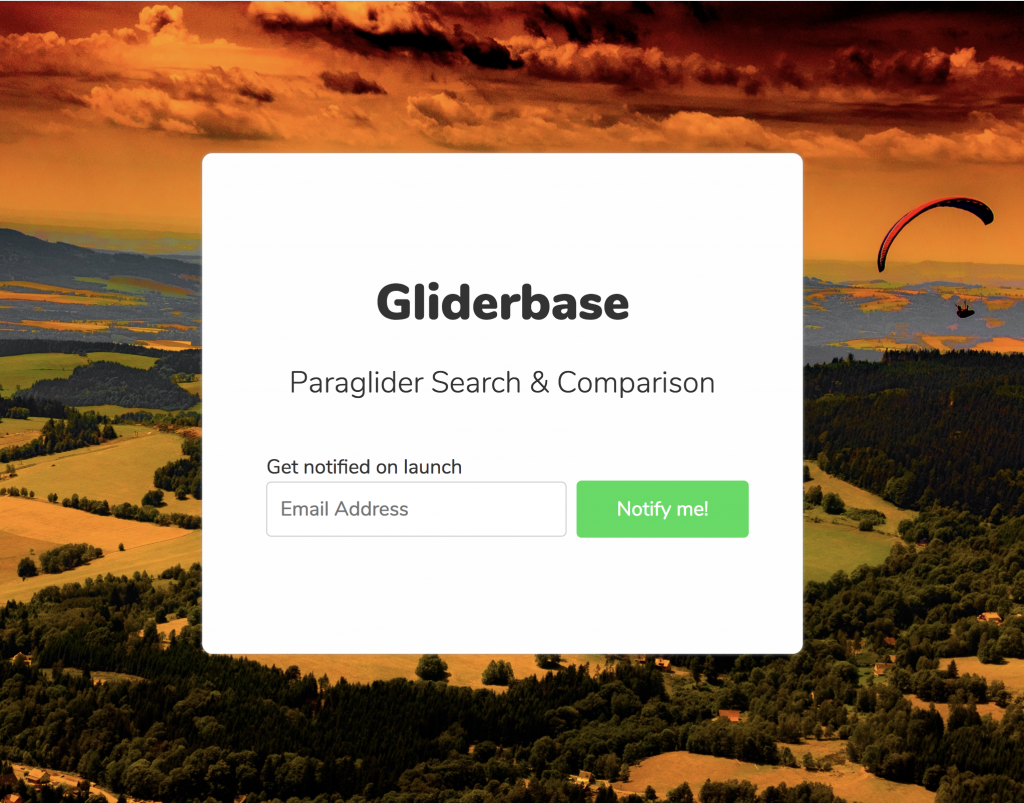 Since this will only be the start, I’m looking for like-minded people with passion and skill. If you love what you do and if you love being independent with it, and if you’re curious about collaborating on something, write me an email!